(No-Twin Tuesday #2) NOW: Tim and I had a discussion/argument last night during our walk.  Is walking good enough?  It came from the idea that I wanted to go to bed early because I kept getting up early to go running.  He (get ready to awww) didn’t want me to go to bed early because that’s the only time he gets to spend time with me.  AWWW.  What a great hubby!  (I argued the point that his ‘spending time together’ consists of watching TV, but he insists it still counts.)  Anyway, he asked why I was running in the morning if we take a walk for exercise anyway?  I told him that I hadn’t lost weight in a while and that I didn’t think the walking was enough.

So, we decided we need to get back on the Wii Fit.  This means fewer walks with the twins….although they enjoy it, they seem to be getting a little bored anyway.  And once I’m off for the summer I can take walks in the afternoons with them if they miss them.  But, that means after they’re in bed is when we exercise.  So, it cuts a little bit into our “alone” time, but it’s better for us physically.  Who knows?  Maybe after we’re both at the weight we want to be we can scale back a little and do walks more often.  Right now, it doesn’t seem to be enough.  The Tim Hortons Iced Coffees probably aren’t helping either.  This is now. 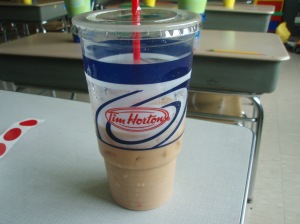 THEN: I think part of the reason I lost so much weight while trying to get pregnant is because I was so stressed.  I convinced myself that losing weight would help me get pregnant, which got me started.  But then I realized how good I felt while I exercised.  It cleared my head.  It worked my body.  It gave me an emotional boost whenever I saw the number on the scale go down.  It really was one of the best things I could do for my body and my brain.

During the time that I was trying to get pregnant, I tried to just convince myself that “this baby was not meant to be mine”.  Meaning, that months’ exact combination of sperm and egg would have been a unique creation…..and it just wasn’t meant to be my child.  I think that sort of helped me get through.  That eventually, we would be paired with our perfect little offspring and that he/she was the one that was the perfect combination.  Anything to help me cope.

The first month on injectables, I had a chemical pregnancy.  I probably wouldn’t have even known, except that I was going for bloodwork like every other morning.  (This needle in addition to the ones I was poking into myself).  I was scheduled to go for bloodwork 14 days after my insemination to see if I was pregnant, as long as I didn’t get my period.  So, I went for the bloodwork.  My emotions were through the roof because I was actually a couple days late for my period.  Yay!?  They called me later that day and scheduled me to come back in a couple days because the results weren’t negative.  What?  Well, does that mean they are positive?  No.  My hormone levels were just the slightest bit elevated…..but not high enough to be called “pregnant”.  But, maybe we were just too early.  Those two days were the worst/best.  MAYBE MAYBE MAYBE.  No…..when I went back  the levels had dropped again.  I questioned the nurse and she told me that would sometimes happen with a chemical pregnancy.  Basically a SUPER DUPER early miscarriage.  Being the optimist, that gave me hope again.  I HAD (kinda) GOTTEN PREGNANT.  That was then.

Things I’ve Written About in the Past